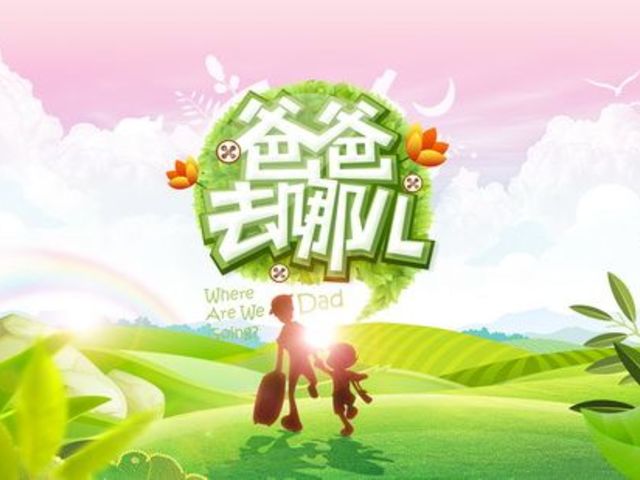 Do you like watching Chinese variety shows?
Watching TV shows can be a great way to improve your Chinese listening skills and learn new words. But sometimes it can be hard to find a show that fits your level of Chinese. In this post we recommend some popular Chinese variety shows, suitable for learners of different levels.

First, let’s see how you can use Chinese to ask a friend whether they like to watch variety shows or not.

Alright, that wasn't too hard. Now let's take a look at some popular variety shows.

Recommendation 1: 爸爸去哪儿（Where Are We Going, Dad?）

"Where Are We Going, Dad?" is an outdoor reality show which is currently on its third season. Let’s first learn how to say the name of the show in Chinese.

"Where Are We Going, Dad?" is an outdoor reality show.

In the program, famous fathers travel together with their children to unfamiliar places and are given different challenges they must clear. For many of the dads, who live busy schedules, it is the first time taking care of the children on their own, and their inexperience looking after their children causes a lot of commotion. The program is a very light-hearted fun show about the relationship between the fathers and their children, and is very popular in China.
Because the program has children in it, the conversations are relatively simple; the talking speed is relatively slow and some subtitles even have pinyin. It is therefore suitable also for learners who have only studied Chinese for a while. It is easy to follow along even if you cannot understand everything that is said.

You can watch "Where Are We Going, Dad?" on HunanTV's official YouTube channel.

Recommendation 2: 非诚勿扰（If You Are The One）

"If You Are The One" is a large-scale dating and friendship program, which started in 2010 and is broadcast every Saturday. Let’s first learn how to say the name of the show in Chinese.

"If You Are The One" is a large-scale dating and friendship program.

The show has 24 single women who decide whether the male guests can stay or not by turning on or off their lamps. If there are any women who still have their light on at the end of all the stages, the male guest and one of the women are declared a couple.

The program contains self introductions given by the male guests, and a section where the male and female guests question each other. Basically all the terminology used are everyday words. By watching this show, you learn not only commonly used words about dating and friendship, but also learn how contemporary young Chinese men and women think about love and marriage.

You can watch "If You Are The One" on JiangsuTV's official YouTube channel.

"Happy Camp" is a game show about daily life, which started in 1997 and is broadcast every Saturday. Let’s see how you say the name of the show in Chinese.

Each season, the show invites new popular Chinese guests to participate in different simple contests. For example, in a recent episode the guests were divided into two teams, and competed in guessing the names of the songs that were played. Sometimes the losing team is given a punishment, like having to drink a very sour drink. The show's purpose is mainly just to entertain its viewers.

The host speaks relatively fast, sometimes even using dialect or internet slang words. If you can perfectly understand what the host is saying and understand all the jokes, then that shows that your Mandarin is already as good as a Chinese person.

What are you waiting for? Hurry up and go watch some Chinese TV!

This is the accompanying blog post for our upper intermediate lesson "Recommended TV Shows".
You can read the entire lesson for free using Du Chinese, available for iPhone and Android.
Click here for more information.