The Duanwu Festival Aka The Dragon Boat Festival The Duanwu or Dragon Boat Festival () is a traditional Chinese holiday occurring on the 5th day of the 5th month of the traditional Chinese calendar (June 9th in 2016). The focus of most celebrations involves eating zongzi ( ), drinking realgar wine (), and racing dragon boats ().

There are many legends about the origin of the festival, the most popular of which is in commemoration of Qu Yuan (340-278 BC), one of China's earliest poets and an outspoken minister of the ancient state of Chu during the Warring States period of the Zhou Dynasty. Qu Yuan was exiled by by King Huai of Chu. In 278 BC, the capital of Chu was defeated by Qin. Qu felt powerless to save the country, and committed suicide by drowning himself in the Miluo River.
It is said that the local people, who admired him, raced out in their boats to retrieve his body. This is said to have been the origin of dragon boat racing. They also dropped balls of sticky rice into the river so that the fish would eat them instead of Qu Yuan’s body. This is said to be the origin of zongzi. 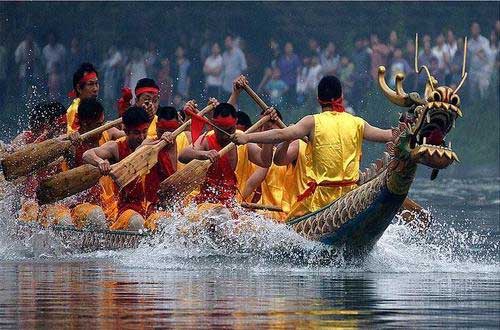 (Racing Dragon boat) are traditional during the Duanwu festival. A standard dragon boat crew is typically composed of 22 including 20 paddlers, a drummer (sometimes referred to as a caller) and a sweep. Drummers are of vital strategic importance as they set the pace and synchronize the paddlers using their rhythmic drumming. The sweep controls the direction of the boat using a rudder mounted on the left side of the boat. The sweep also ensures the safety of the crew by over riding the drummer in case of a collision since he is the only member of the boat with control facing the front of the boat (the drummer faces backward). Paddlers on dragon boats provide the forward thrust for the boat. Extreme co-ordination between paddlers is valued and team co-ordination is a frequent decider of races.
Dragon boats are decorated with Chinese dragon heads and tails. The sun is considered to be at its strongest around the time of summer solstice on Duanwu Festival, as the daylight in the northern hemisphere is the longest. The sun and the Chinese dragon both represent masculine energy in traditional Chinese culture, so the two were naturally associated with each other. 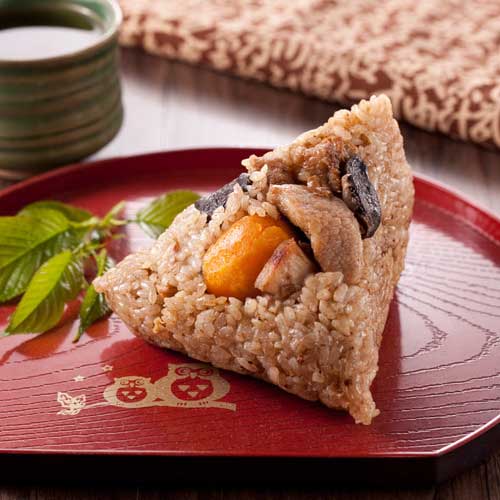 (zongzi) is a traditional Chinese food, made of glutinous rice stuffed with different fillings and wrapped in bamboo, reed, or other large flat leaves. They are cooked by steaming or boiling. The most delicious zongzi I’ve eaten was the of a restaurant called 1980 in Xiamen. In October of 2009, I walked into this famous restaurant located at the end of Zhongshan pedestrian street for the first time. I had never tasted a Zongzi filled with meat, shrimp, chestnut, mushroom, and , with peanut butter and a sweet chilli dipping sauce and I was amazed! In my hometown, Zongzi are usually served plain with a very light and delicate aroma of rice and leaves. I would dip them in sugar for a little more flavor.

(Realgar wine or xionghuang wine) is a Chinese alcoholic drink. Realgar was considered to be a universal antidote against poison by traditional Chinese medicine, so it is believed that drinking realgar wine is of benefit for the prevention of diseases on Duanwu Festival.

Now that you know more about the Dragon Boat Festival, you can talk about it with your Chinese friends like this:

In my hometown, we also use Chinese Mugwort to prevent diseases. My mom would tell me that in her childhood, they would light Chinese Mugwort in a house with all the windows and doors closed to disinfect the house. They would also bathe in water with boiled Mugwort to clean themselves on the Duanwu Festival.
What do you want to do on the coming Duanwu Festival? The most important thing for me is to eat the best Zongzi. Many of us call it “ (Zongzi Festival)” and say “ (Happy Zongzi Festival)”! There is a song named of Jay Chou, a well-known Taiwanese singer-songwriter, one of my favorite Chinese singers. To celebrate the Duanwu festival I think it’s a good idea to listen to it while eating Zongzi.

You can know more about Duanwu festival from this video:

This blog is provided by GoEast, Professional Chinese Language Training.
This is the accompanying blog post for our upper intermediate lesson "The Dragon Boat Festival".
You can read the entire lesson for free using Du Chinese, available for iPhone and Android.
Click here for more information.